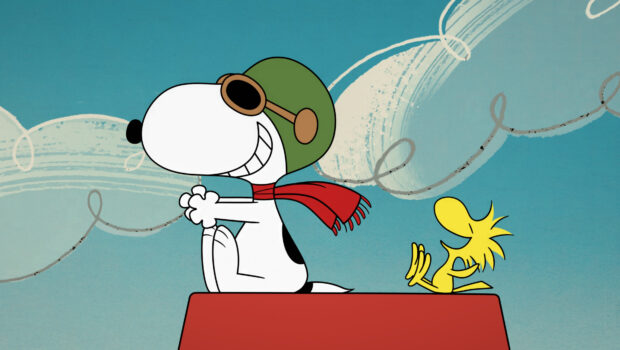 America loves dogs in films and on television. We also love cartoon dogs in the pages of the Sunday comics and in animation. To list all of the cartoon dogs that have made some kind of impact on American pop culture could fill an entire book. Here, however, is a small who’s who list of dogs that have been popular in cartoons over the years. 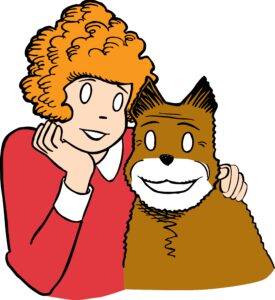 Fans of Harold Gray’s comic strip Little Orphan Annie fondly remember Annie’s dog, Sandy. Although Sandy never had much to say except the occasional panel-ending “ARF!” she was loved nonetheless and often was able to help Annie out of tough scrapes when fighting Nazis or investigating haunted houses. 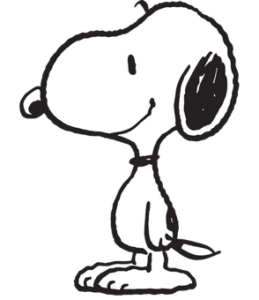 Easily the most recognizable cartoon dog in American history, Snoopy – the real star of Charles Schultz’s Peanuts – is an American icon. Snoopy stole the show in every Peanuts strip he appeared in. He fought the Red Baron from the top of his dog house, was the proud owner of original paintings by both Vincent Van Gogh and an Andrew Wyeth (the Van Gogh was sadly destroyed by fire), never quite finished his novel but typed the opening line “it was a dark and stormy night” countless times, and had a twin brother named Spike who lived in the desert outside Needles, California. Not bad for a Beagle. 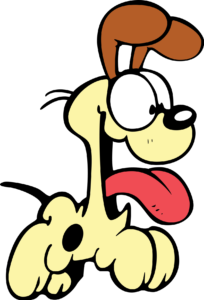 It is nearly impossible not to love Odie, the relatively stupid, completely mute (he doesn’t even think in words), and incessantly slobbering canine companion of Garfield the cat in the Jim Davis strip Garfield. Odie was there simply to be abused by Garfield, no doubt about it, but there are plenty of times in the history of the comic that we get to see just how important the little dog is to the titular chubby cat. 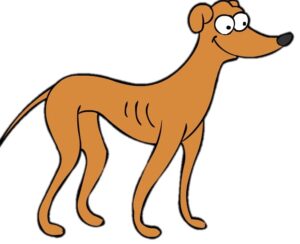 What better pet for the misfit Simpson family than Santa’s Little Helper, a weary greyhound that couldn’t win a race if his life depended on it? From the Christmas-themed pilot episode of The Simpsons to the episodes airing today (as of this writing the show is in its 16th season), SLH has been a fixture in the constantly expanding Simpsons universe. Who can forget SLH destroying Homer’s prized giant cookie, learning to talk in an effort to distract the family’s attention away from their “new” dog Laddie, and being trained as an attack hound by Mr. Burns and the not quite in the closet Waylon Smithers? Santa’s Little Helper is everything the Simpson family dog should be and more. Watch for his Snoopy imitation at the end of one of the series’ famous Treehouse of Horror Halloween episodes.