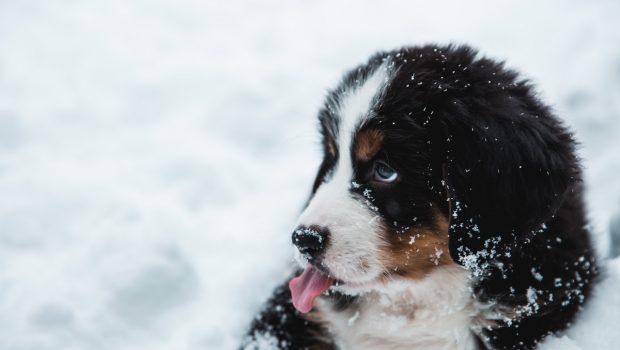 Why Does My Dog Lick Me?

Ever wonder why dogs like licking people. Is it because they’re just being affectionate and licking is their way of saying ‘I love you’?

Or perhaps their owner just tastes good and they can’t help but get a little human flavor in every so often to sweeten the deal?

Why dogs love to lick people

Just the same way dogs love to bark, it’s the same when it comes to why they love to lick. Given that a dog’s bark is a form of communication and could be translated to mean various things so is their licking behavior. Barking comes naturally to a pup as well as an adult dog and they’ll do it when they’re happy to see their owner, or when saying high to their next-door doggie buddy.

If one owns a dog, it’s very likely that the dog loves to lick at them occasionally if not all the time. We, humans, decode that as a sign of affection.

Licking people seem like an inherently social behavior in dogs. But unlike barking which one knows a dog is hard-wired to do as a primary way of communicating, one can’t help but wonder how a dog comes to know that licking their owner shows affection.

Where do dogs learn how to lick people?

A common social behavior displayed by a female dog toward her pups is licking them. In fact, one might observe the interaction between pups and their mother comes with a lot of natural licking behavior. For instance, during play, a female dog might be lying down on the grass taking in the morning sun while her pups scurry around her playfully pawing and gnawing at each other. The pups will often stop to just give their mom a lick a lick or two or three. The pups will also be seen licking affectionately at each other as part of their play.

It seems that licking is hard-wired in them or perhaps they learn it from their mom during their formative years of socialization.

Pups can also learn that licking is also a way of soliciting resources from the mom. For instance, other than just going under the mom’s udder and grabbing a tit to suckle, a pup will often lick their mom when hungry and in need of milk. Often the female dog will find a spot to lie down and allow her young to suckle.

If one knows their dog very well, it becomes apparent that they will not just lick anybody. For instance, they won’t lick visitors the first time they come to the house or strangers along the way when out for a walk. Dogs will only lick people they know. To be more specific, they’ll lick people whom they’ve grown accustomed to and are comfortable with such as members of the family. It’s very common for the family dog to lick the baby in the family. This is very telling and further reinforces that dogs will lick their owners as a sign of affection and also those they care for as a sign of protection.

The pups, however, do tell a slightly different story when it comes to who they choose to generously dispense their licks too. Pups just like most human little ones will take to almost anyone who wants to play even complete strangers. They’ll often lick complete strangers who pet them and are willing to play with them. This goes to show that for pups and dogs in general, licking a human being comes from a place of contentment, pleasure, and affection.

Dogs are considered man’s best friend amongst all domesticated animals because they are incredibly intuitive. They can lick their owners to alert them of a need like an illness or pain of some sort. They’ll first begin by licking the painful area, then licking the owner in an attempt to communicate pain.

Can a dog’s licking habit be obsessive?

From a human standpoint, some dogs can tend to lick their owners and caregivers obsessively. But from the dog’s point of view, it cannot lick loved ones nearly enough. However, should one feel that their pooch has become a compulsive licker and the recipient of the licks would like to turn down the licking a notch or two, they can always seek the help of a vet to help their overzealous canine buddy with their behavior. Just the same way dogs can be helped with excessive barking they can also be helped excessive licking of people through behavioral therapy by a professional vet.

The vet will also help the dog owner understand whether indeed their pooch’s people licking habits are excessive or completely natural and affectionate.

Dog owners that have pooches that love them can be sure that their canine buddy will often communicate that affection by licking them on the hand and most definitely their faces. It often happens at a time that one least expects it and it feels like a tickle then sloppy.  Some people find the licking sensation ticklish. If the dog notices the joy and laughter the lick elicits,  it’ll enjoy eliciting that sort of reaction from the owner and other family members who care for them. It’s fair enough to say that a pooch who loves to lick likes to show feelings of content, gratitude, and affection in doggy language. And there’s nothing wrong with showing some canine love.