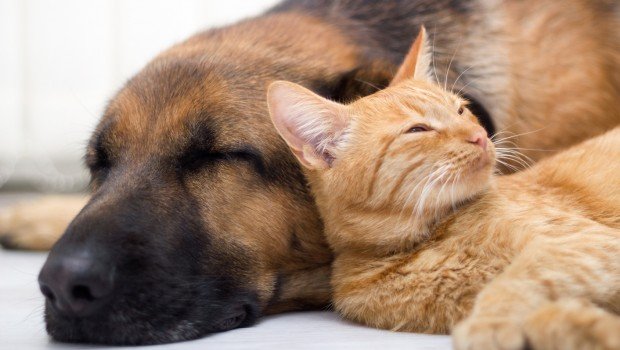 How To Make Your Dog and Cat Become Friends

The secret to starting and maintaining a loving relationship between your dog and a new cat (or vice versa) lies within how carefully you introduce them to each other. You have already made the decision to bring a different species into the house so invest as much time and care as you can in order to ensure that both of your animals start off with a positive experience with one another.

The introduction of a cat and a dog can best be broken down into the following seven steps:

Step 1: When you first bring home the new dog or cat, confine each of them to a specific area of the house where they cannot see one another. The object is to allow the two animals to smell and hear each other without seeing each other. This arrangement gives the newcomer plenty of time to get used to his or her new living area, while your resident pet is safely confined on its own.

Step 2: During this time apart, grab an old towel or T-shirt and rub it all over the new dog or cat. Then take the towel and bring it into the room where your resident pet is at. Place the towel next to the dog or cat so that they can get used to the new pet’s scent. This is the first step in getting each animal used to one another.

Step 3: Allow this arrangement to go on for about an hour or two. After this time period is up, switch up the scene. Place each animal in the room where the other was at beforehand, and be sure to give a scented towel to the new cat or dog, with the other pet’s smell rubbed on it.

Step 4: Next you will create a positive association with one another by having each animal on different sides of a closed door. Place some treats or pet food for both of them next to the door. The goal is to get each animal to enjoy their food while knowing they’re close to one another. This starts a positive association between the joy of food and knowing that both pets are doing something fun while sensing each other’s presence.

Step 5: Continue with this arrangement until you notice that the animals are less curious about sniffing each other from underneath the door. Your next move during this introduction period is to allow each animal to see one another, but still being divided by a gate or screen door. There may be some initial tension which will eventually subside through treats and petting of both animals.

Step 6: Once they are both calm and relaxed, slowly allow more interaction to happen. For example, you can bring them both into the same room, but keep your dog on a leash while you sit on the couch. The cat will approach your dog at its own pace. Should your dog become overly excited and aggressive, a quick spritz of water is plenty of discipline. Your job is to prevent your dog from creating the habit of becoming excited and wanting to chase the cat. And the cat must come to understand that the dog will not harass it.