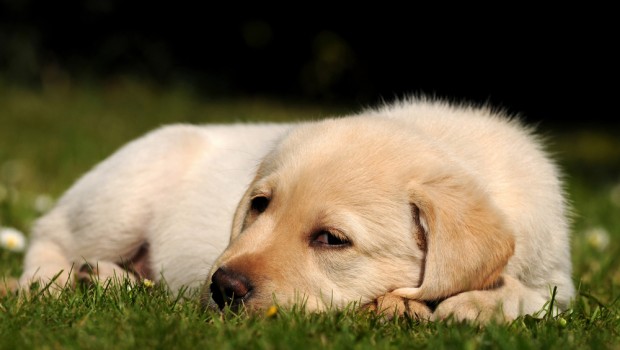 Each year as the warm weather approaches, dog owners should be increasingly apprehensive about those gluttonous, disease-carrying ‘Rhipicephalus Sanquineus’. This dangerous creature can infect man with Rocky Mountain Spotted Fever, cause paralysis, and even kill dogs and puppies.

Referred to by almost everyone as ‘ticks’, these parasites are blamed for carrying the micro-organism that caused the death of so many British war dogs in Singapore several decades ago. And during the Vietnam war, more than 300 U.S. war dogs had died mysteriously from the tropical canine hemorrhagic syndrome and canine hemorrhagic fever. Intensive studies resulted in the finger of guilt pointing directly at the ordinary tick.

Although there are several different species of ticks (wood tick, brown dog tick, etc.), a tick by any other name is still a tick. Because of resistance to insecticides, the tick is one of the most difficult external parasites to control.

The female tick will lay up to five thousand eggs in the crevices of a kennel, baseboard, or under the carpeting in the home. Eggs are never deposited upon the host animal. After twenty to thirty days have elapsed, the eggs hatch and become larvae. The larvae then seek out a host dog, gorge themselves on his blood, then drop off again to hide.

Six to twenty-three days later, the larvae molt and become eight-legged nymphs. The nymphs obtain another blood meal from a dog, drop off again, and go into hiding. Twelve to twenty-nine days later, the nymph tick molts and becomes an adult. As an adult, it once more seeks the dog, engorges blood, and mates.

From the time the eggs hatch: and before the tick becomes an adult: it returns to the host dog more than once to feed on the canine’s blood. Once hatched, however, a tick can live in a house for up to two years without needing a host dog to feed on.

Out of doors, ticks climb onto branches and into the foliage to await the arrival of a dog host. A dog-napping under a bush, or walking within jumping distance of the tick is all that is needed to provide the parasite with a host. In the home, ticks will emerge from beneath rugs and carpeting, climb walls, table, and chairs, and even up as high as wall pictures, to await the passing of a dog. They may even have to wait up to six months, but a tick can instantly sense the approach of a dog and jump on it as it passes.

Once on a dog, a female tick buries her head beneath the skin tissues, extends her barbed ‘tongue’, and is then clamped on tight. Once the head and barbed probe are beneath the skin, no amount of shaking or scratching by the dog will cause the tick to dislodge.

The tick then feasts upon the dog’s blood in this manner until she bloats to about the size of a pea. The male tick (brown, and a fraction of her size) then mates with the female. When she has received her fill of blood from the dog, she withdraws her barbed probe and drops off of the host dog. She’ll then crawl into tiny crevices between sofa cushions and carpeting to lay her thousands of eggs.

Once a home or kennel is infested, eradication is no simple process, any more than ridding a dog of the parasite is a simple process. A single tick found on a dog necessitates immediate and zealous efforts at all stages of its life cycle.

Removing a tick or ticks from a dog can be done by the owner, providing the tick has not attached itself to the inner ear, on the eyelid, or some other inaccessible place that would require anesthesia. And because the tick’s probe is barbed (similar to a fishhook), brushing or combing by the dog owner may rid ticks that haven’t yet ‘locked on’, but does nothing for those that are already attached.

The dog’s hair should be pulled back from around the tick for the benefit of full exposure. A few drops of iodine or rubbing alcohol can then be applied directly to the tick. This will momentarily shock the parasite, and in some cases, cause it to loosen its probe.

Using a pair of tweezers, and getting as close to the skin line as possible, the tick can be pulled out with a slight twisting motion so that the head is not severed and allowed to remain embedded in the dog’s skin. If that should occur, a secondary infection could result. It is always wise to reapply iodine, alcohol, or other antiseptics to the puncture once the tick is removed. If the tick’s head remains beneath the dog’s skin, applications of hydrogen peroxide can be helpful.

Once the dog is free of ticks, complacency on the part of the dog owner usually results in reinfestation. It should be remembered that if the dog picked up a tick, he may well have picked up larvae from four or five thousand recently hatched eggs. Dousing with a tick powder or other acaracide would be beneficial here, but if the larvae have dropped off in your home or yard, removing the original tick is only the beginning of the battle.

Ticks are amazingly efficient at surviving almost any attack. The rate of propagation and resistance to insecticides is phenomenal to say the least. In heated kennels and homes, ticks breed all year round. When the weather is cold, they’ll withdraw to cracks and crevices to await warmer times.

Since it takes twenty to thirty days for eggs to hatch, an infested home should be treated at ten-day intervals, at least four times, then once a month for two or three months. Sprays and insecticides used should be marked as an acaracide. Other insecticides appear to have little-to-no effect.

Usually, it is only necessary to spray as high as two or three feet from the floor up the walls (unless tick infestation is heavy). If the family dog is accustomed to sleeping on the sofa or in overstuffed chairs, spraying should include those areas, paying particular attention to cushions as well as the edges of rugs and baseboards.

To man, the tick represents the disease known as Rocky Mountain Spotted Fever. Originally, it was thought that the disease was restricted to the region of the Rocky Mountains, thus its name. However, it is not regional at all, and maybe acquired over a considerable portion of the United States, east and west, and even in Canada. (The tick is also responsible for ‘rabbit fever’ in rodents, which is transmissible to man.)

In the southern portion of the United States, as well as in France and Africa, there is an intestinal protozoan parasite, Babesia, which attacks blood cells in a dog and causes extreme anemia. This protozoan is spread from dog to dog by ticks. Heavy infestation of ticks upon a dog can cause an extreme loss of blood, anemia, paralysis, and even death.

Flea and tick collars are available commercially, but while such collars might eventually cause the tick to die, much damage and infestation can be done in the interim. Veterinarians can also prescribe tablets, which, when given to a dog, ensure that any tick that bites the dog will die.