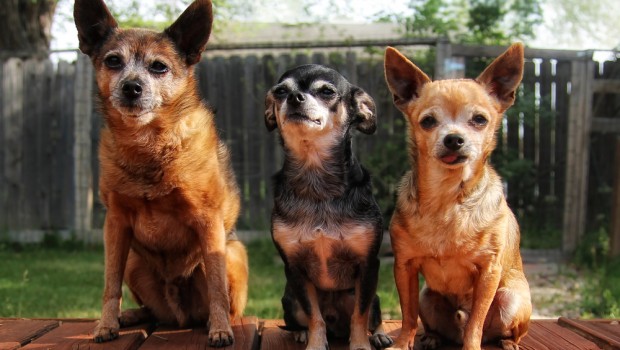 How To Approach Strange Dogs

Knowing the right way to approach a strange dog will go a long way toward ensuring your safety, and the safety of those around you. At the same token, knowing how not to approach one can do the same. Children should also be educated about the correct procedure. Some of their little innocent ways can trigger an otherwise well-behaved dog with aggressiveness and worse, biting.

Knowing which type of biter you are confronted with depends on the situation you are in at the time. For instance, if you are walking along the sidewalk in a residential street, minding your own business, and a dog suddenly leaves his yard, runs directly at you and bites, this is indiscriminate biting. This is a spoiled dog that is probably the dictator in his household. He is the type of dog that merely allows his family to co-exist with him in the house. It could be any breed, from a Toy Chihuahua to a Giant Schnauzer.

Fortunately, dogs that fall into this category are in the minority and are usually confined and restricted because the owners are fully aware of their bad behavior. Undoubtedly, they probably have been the recipients of occasional bites from their own dogs whenever the animals didn’t get their way.

The fear biter falls into another category because his demeanor could be genetically inherited, or he could be a product of under-socialization with different types of people and situations when he was a puppy. He could be in a panic-stricken mind at the time of the bite.

A friendly but injured dog, he could suddenly become a fear biter depending on the circumstances. If you stop on the highway to rescue a dog that has been struck by a car, the dog may think that you are the one who hit him, rather than understand that you are there to rescue him.

Finally, a protective biter is one that’s unable to reason any farther than the fact that he feels the need to protect someone or something. Usually, the protective biter is in the group known as the working breeds. That is dogs whose ancestors were originally bred to herd livestock or to protect properties and real estate. Most dogs have this protective instinct but it seems to manifest more predominantly within the working group.

Most dog bites occur on a dog’s own property and the majority of these bites occur out of fear. The fear biter is protecting nothing but himself. He seldom goes out of his way to bite, any more than any person would go out of his way to take a poke at a tiger. The fear biter will keep his distance, yapping, and barking, and he may try to maneuver behind you to bite. Your first task is to attempt to make friends.

Get Eye-To-Eye With The Dog

The best way is to stop and kneel down so that you will be on his same level. You won’t give the appearance of being a giant and you will help to lessen some of the possible causes of the dog’s fear. The fear biter will then apply3 senses that nature has provided him: His ears, his eyes, and the most important one of the three: his nose.

If you take the time to talk in a quiet, friendly, yet enthusiastic tone, he will be able to hear your voice that you are neither aggressive nor angry. With his eyes, he can see that you are not walking toward him and that you have knelt to his level. If you are carrying anything in your hands, like a bag, books, etc., you need to lay them on the ground for a moment. The fear biter may confuse these objects as possible weapons.

His third defense mechanism is his sense of smell. He will use this sense to pass judgment on you. The best thing you can do is to let him approach you, with his own time, and at his own speed. He will cautiously and slowly make his way to you. You can make it easier for the dog if you extend the back of your hand for him to smell.

Some people offer the palm of their hand, which is not a wise thing to do. If the dog has ever been struck, chances are it has been hit with an open hand. An open hand, therefore, signifies a weapon. Extend the back of your hand, below his eyes and never above his head.

When strange dogs meet on the street, they obligingly stand for scent identification. You should do the same when approaching strange dogs. After the fear biter has examined your scent and comes to the conclusion that he’s not in any danger from you, he will normally back off and allow you to proceed, provided that you keep a safe distance from him. His agenda is not to bite or have a confrontation with you. Keep in mind that he’s the one that’s scared here.

Do not give the impression that you are scared, even if you are. On the other hand, be careful not to show authority or dominance. Instead, let him know that you are willing to be his friend if that’s the way he wants the relationship to go. If he doesn’t accept your offer of friendship by showing your outstretched hand, at least he knows that he has nothing to fear from you.

Remember to let him come to you, not the other way around. If he doesn’t come, that’s fine too, just make sure that whatever movement you make, it is casual and slow. As you get up, continue talking in a friendly, gentle manner. Never force your attention on a dog that’s unwilling to come to you.

Dogs that are trained professionally as attack dogs, guard dogs, and patrol dogs, are trained to see through a person’s disguise. In other words, a burglar who puts up an aura of fearlessness and confidence, thinking that he can dazzle a trained guard dog into believing the burglar is ‘Mr. Nice Guy’ will be in for a surprise! For a well-trained dog, all the sweetness, fearlessness, and confidence in the world won’t win past his professionally trained senses.

Most household dogs are not professionally trained and act on instinct alone. It is this instinct that will eventually allow you to pass through, or stop you in your tracks. If you are approaching a house to visit friends, sell a product, deliver mail, read a meter, or anything else that’s considered legitimate, the protective biter will be able to sense that you are legitimate if you take the time to allow him to study you. The secret is in allowing the dog time to get acquainted.

Do not expect the dog to not bite just because his owners said so. Many dog owners have been mistaken at this assumption, leaving visitors injured by ignoring the dog’s warnings at the door. Even if your host insists that the dog is very friendly and has never bitten anyone, take the time to establish a connection with him.

Keep in mind that the host knows you’re an invited guest, but to the dog, you are an intruder in his home, his lair, his domain. Let the dog be the judge and give him time to make his judgment. Meet him on his level, talk to him, and give him the satisfaction of scent discrimination.

The Good Samaritan attempting to capture an obviously strayed, lost, starving, or homeless dog or a person trying to rescue an injured dog, often has his confidence crushed when he is bitten by the very dog he is trying to save. A dog does not trust a situation which he doesn’t understand. If he’s been hit by a car, he doesn’t understand why. He only knows that he’s hurt. Chances are that his only remaining defense is his mouth.

Talking friendly and softly to an injured dog while slowly securing his mouth shut will shift the odds in your favor. A belt, a piece of rope, or a strip of rag will suffice, immobilizing the dog’s mouth so that you can safely remove him to a safe location and administer first-aid treatment.

Keep in mind that, in an injured state, making friends is the farthest thing from a dog’s mind. His main thought is to survive and ward off any potential attackers that come in his way, including you, even though you are there to help.

If All Else Fails, Defend Yourself!

If you have observed all the general rules and precautions and still find yourself in the position of being attacked by a strange dog, your best defense is to shield your face and neck with your arms, exposing only the side of your body to the dog. Your actions should only be that of defense.

You should yell and make the most harrowing, alarming sound possible with your voice. Keep in mind that a dog does not trust anything that he doesn’t understand. You can confuse his current thought process by making strange, eerie noises, while at the same time calling for help with your cries.

Try To Keep The Dog Off Balance

Raising your knee to keep the dog off balance can help protect you against serious injuries. I have encountered a great example of this technique one day as a large German Shepherd bolted through an unlocked screen door. The object of the dog’s attack was a new mailman on his way to the mailbox.

Shielding his face and neck with his arms, the mailman cut loose with strange, ghastly sounds. The sounds stopped the German Shepherd cold in his tracks, created attention to every neighbor on the block, and the postman came out of the scene unharmed.

Talking with the mailman later, he admitted never having used the dog repellent spray that many mailmen carry with them for protection. He confessed that he has more confidence in his own method.

Some occupations have a high incidence of dog bites. Among the more noted of these are the mailman, meter readers, newspaper deliverers, pizza deliverers, solicitors, and trash collectors. Classified with the higher-risks would be the solicitors or the door-to-door salesmen. If people who are in these occupations had a better understanding of what makes a dog bite, the incidence would be greatly reduced, maybe even completely eliminated. Children also suffer a high incidence rate because they panic, run, or force their attention on the dog.

So whether you are confronted with the protective biter or the fear biter, keep in mind the most important things: Let the dog come to you, at his own pace. Never force yourself on him, thinking that he’ll know right away that you are not a threat. Meet him on his level. Kneel down to his size and extend your arm with the back of your palm exposed for him to sniff. Let the dog take all the time he wants to decide whether or not to be your friend. When you are face-to-face with a strange dog, that investment in time can play a crucial role in your safety.